These days, there seems to be an endless amount of music player apps accessible on the web, from Pandora to Cantio, and the amount available in the mobile market is constantly growing. If you have an Android device, you're probably well aware of Jukefox, which lets you listen to your music collection on the go and provides you with a new way to interact with your songs, with 2D and 3D mapping of your albums. But as good as Jukefox is, it has problems (mostly technical).

For those of you fed up with Jukefox, there's another music player available for your Android smartphone called Mufin Player, which expands upon Jukefox's premise with a better looking interface, snazzier design and more accurate music recommendations.

After you download and install the free Mufin Player app for Android, register an account online with Mufin and download the PC version of Mufin Player (an iTunes alternative!) to be able to upload your music to their cloud storage service called the mufin.drive. Once you're registered and have your music uploaded, you'll be able to stream your favorite tracks from anywhere on multiple Android devices, as well as scrobble your music to Last.fm.

Once the Mufin Player analyzes your songs, it knows the sound of each track, making it possible for the program to arrange them in a fresh, easy-to-use interactive map. You can then play music based on your mood, whether it be sad, upbeat or dark. It's not a new app, but it's undergone a lot of improvements, based on user feedback.

"It's like Google Maps for music on steroids," claims Mufin. 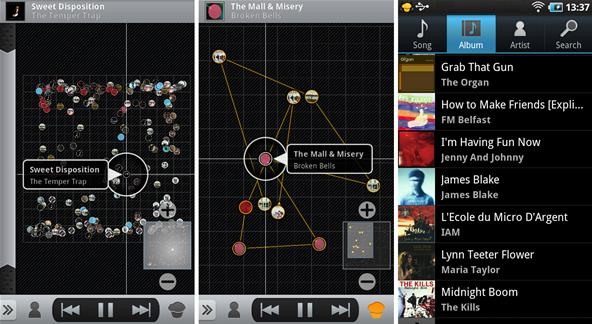 Besides the new improvements, Mufin Player for Android also lets users create quick sound-based playlists with a single tap of the button. A filter function has also been incorporated for the visualized music library, making it easy to find all types of tracks, including recently added ones.

The free Android app limits you to 10 songs per playlist, so if it's worth it to you, check out the Mufin Player Pro app ($2.86). It allows you to have 20-song playlists, as well as the ability to download your music directly to your devices.

Want to master Microsoft Excel and take your work-from-home job prospects to the next level? Jump start your career with our Premium A-to-Z Microsoft Excel Training Bundle from the new Gadget Hacks Shop and get lifetime access to more than 40 hours of Basic to Advanced Instruction on Functions, Formula, Tools, & More.