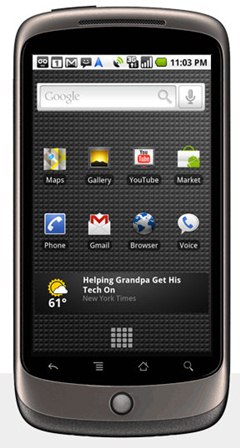 Finally, what appears to be a fair and worthy competitor to the iPhone: Google's Nexus One. Unfortunately, not much competition concerning the price- runs exactly the same amount as the iPhone.

"The Nexus One runs the latest version of Google's Android mobile operating system, allowing for several forward-thinking features. Nexus One users can rely on speech anywhere on the phone where text can be input — users can speak their e-mails, text messages, tweets and web searches. The phone also uses dual-microphone noise cancellation for improved voice quality and speech recognition, and has a vastly improved user interface which incorporates widgets that can pull in live data feeds from web services like Facebook...

The phone will retail for $180 with a 2-year contract with T-Mobile, but will also be available for $530 unlocked. It ships today and is available for purchase immediately at Google's new online store. The Nexus One will be available on Verizon and Vodaphone networks this spring, Google says."

Last, but not least. WonderHowTo's first Nexus One tutorials:

Itching for even more info? Check out Gizmodo's Nexus One breakdown, including cost, providers, and features.