Security awareness seems to be a hot topic these days on the web, with developers making apps and devices that can hack networks and machines with just a few clicks. But these applications aren't only exploiting security flaws in systems and networks, they're being used by amateur and wannabe hackers who want to have a little fun, but don't want to learn how to actually "hack" anything.

Firesheep offers these wannabe hackers instant access to people's account information when on a public Wi-Fi connection. Newstweek gives web pranksters the ability to alter online news articles and images that web surfers on the same network are viewing. FaceNiff lets Android owners hijack unencrypted login credentials from users on the same Wi-Fi network. And now there's Anti, or the Android Network ToolKit, which lets anyone with an Android device pwn people, networks and machines—just like penetration testers do.

At Defcon, Itzhak "Zuk" Avraham from Zimperium revealed his new Android-based hacking tool, which will hit the Android Market next week for the fair price of nothing.

Anti is basically a Wi-Fi sniffing tool that finds open networks and shows all of the target devices on them. It also offers traceroute software which can easily reveal IP addresses of any faraway servers. After you identify your target, Anti provides you with a simple command menu that lets you eavesdrop on local devices with a man-in-the-middle attack. It even lets you hijack local machines to take screengrabs, eject discs or open the calculator application. 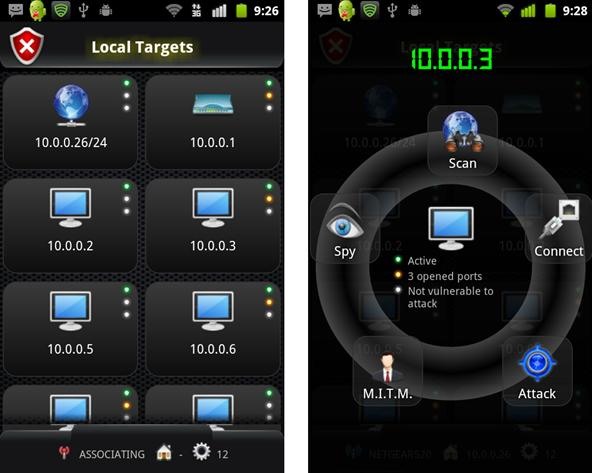 So, now anybody with an Android device can hack. You'll even be able to sniff out SSH passwords in jailbroken iPhones. But if you want the more elaborate penetration tools, you'll have to fork out a measly ten bucks for the "corporate upgrade" of the app.

Surely, ten bucks is worth the ability to find faults in your system... or at least prank your friends.