Remember the good ol' days when you actually had to swipe your credit or debit card to make a payment at the store? Now all it takes is a flick of the wrist to purchase goods with your card, thanks to RFID (radio-frequency identification) technology from Chase (blink), Visa (payWave) and MasterCard (PayPass). But soon "contactless" payments will be made by an entirely different beast—NFC, which stands for near field communication.

Actually, RFID and NFC are pretty much the same thing. The big difference is that RFID is capable of accepting and transmitting data a few meters, while NFC is restricted to a short range of about ten centimeters, making NFC a better bet for keeping your finances safe from hackers. Most card providers have already switched over to NFC or plan to in the near future. And thanks to NFC inclusion on smartphones like the Google Nexus S, people can now ditch their plastic and pay directly by tapping their cell phone to an NFC reader at stores. 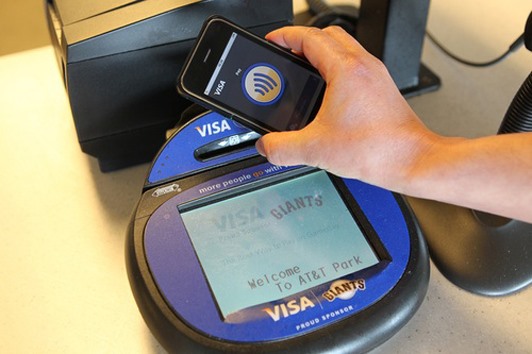 Google Wallet is coming soon for most Android phones, as well as other options for paying with your NFC-enabled device. And PayPal has already unleashed its PayPal Mobile platform that uses NFC for making peer-to-peer transactions by just tapping devices (see the video below, demoed with Google Nexus S phones). Even point-of-sale giant Verifone is hard at work updating all of their POS terminals for functionality with NFC devices.

It's even possible that the new iPhone 5 from Apple will be equipped with NFC technology. But if you don't want to wait to use your iPhone to make "tapping" credit card payments, then you don't have to. Unplggd has the full instructions for turning your iPhone 4 into a payment machine!

Basically, if you have a bank card with an RFID or NFC chip in it (chances are you do), then the process is simple. Unplggd used a single Tap & Pay card from Bank of America that uses Visa's payWave technology. They just cut the card to the size and shape they wanted, making sure NOT to harm the wireless data chip inside, and popped it in the back of their iPhone 4. 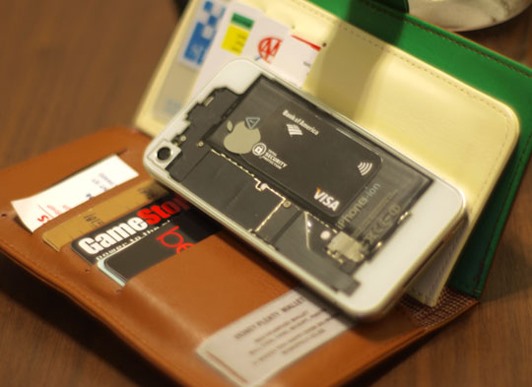 In the above image, you can see they used a transparent back, so you can see where it's placed. But they claim that the normal iPhone back piece should work just fine. To remove the back glass panel on the iPhone 4, check out iFixit's video guide below. Then just place the credit card behind the battery and you're all set.