Bad weekend for Apple, or so the New York Times reports. The top secret version of the next iPhone was mistakenly left in a bar, resulting in a complete breakdown of the yet-to-be released product. 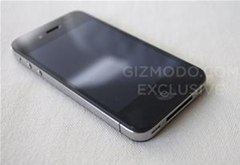 "Apple is known as the most secretive company in Silicon Valley, and leaks are rare. But after the phone prototype was left in a bar in the Silicon Valley town of Redwood City, photos of the device began appearing over the weekend in technology blogs, sparking a frenzy of hype among the Apple-obsessed.

Before long, pictures of the product appeared on Gizmodo, a technology news site, whose editors ripped it apart — as if it were an alien from another planet — to dissect its features. The Web site said late Monday that the phone belonged to an Apple engineer.

The phone's authenticity was hotly debated, but most bloggers concluded it was real. And a person with knowledge of Apple's hardware plans who was not authorized to speak on behalf of the company confirmed to The New York Times that it was real..." (Read more).

It is reported that Gizmodo paid $5,000 for the valuable booty. Get Gizmodo's complete Apple iPhone 4 low down now.

The story of how it was lost is just about as compelling as the device itself: http://gizmodo.com/5520438/how-apple-lost-the-next-iphone

It was at first. Now they're just milking it to death. Trying to get their $5k worth, I suppose...