I'm not going to lie. I was Catholic. But one of my reasons for my faithful departure was having to tell my innermost secrets— my sins— to a silhouetted figure behind a latticed screen. With the creepy enclosed booth structure and separation of sinner and confessor, its anonymity was clear, yet deceiving. You always knew the priest and he always knew you. If I wanted total privacy, was there really a need for this intermediary to God?

In some ways, I'd say a private room at a strip club is more 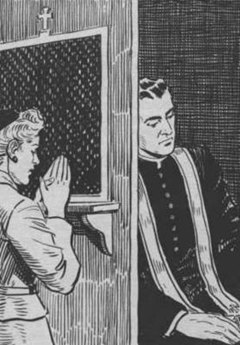 anonymous than the confessional. But in today's web culture, where Facebook takes all anonymity away from one's self, it's doesn't seem like that big of deal anymore.  And with our overgrowing technological dependency, where iPads and iPhones are in everyone's hands, making penitence just got a whole lot easier (albeit even less private).

Le's face it. We're all addicted to our smartphones and the latest applications on the market. And the Catholic Church is finally taking advantage with their Confession app for Apple iOS devices.

Designed to be used in the confessional, this app is the perfect aid for every penitent. With a personalized examination of conscience for each user, password protected profiles, and a step-by-step guide to the sacrament, this app invites Catholics to prayerfully prepare for and participate in the Rite of Penance. Individuals who have been away from the sacrament for some time will find Confession: A Roman Catholic App to be a useful and inviting tool.

Perhaps if we had iPhones when I was younger, I may have been sucked into staying. They say this app encourages lapsed followers to come back to their faith, but for me it's too late.

The one thing this app doesn't do— give you absolution. You still need to go smell the sweet stench of sin and salvation in your local confessional stand.

Maybe one day they'll make an Absolution app. I'd buy that.

Cut out the middle man; ask the Man Himself, God , for forgiveness.
Once you're forgiven he doesn't keep a record of what you confessed to use against you later on.

That is correct. Private sins need to remain private.

This article is fairly inaccurate on the facts. The Catholic Church didn't make this app, it was made by a developer, and was given an imprimatur by a bishop, which merely means that there is nothing that is expressly against the Church's teachings in the app. Kind of different then the Catholic Church making the app.

yep. wasn't made by the catholic church. but the church wouldn't have given its blessing if they didn't think they could benefit, no?