There are over 425,000 apps in the iTunes App Store and the Android Market has over 300,000 available, which makes it really hard to tell which ones you want and which ones you don't. One of the best ways to find new mobile apps is from your family, friends and colleagues—those who have similar tastes in games and productivity. And it goes both ways, which means you need to share your favorite picks with those around you. But what's the easiest way to do that?

On your iOS device, you can share an app directly from the App Store by finding and clicking on the application you want, then scrolling down to "Tell a Friend" which lets you send an email with a link to the application. On your Android device, just open up the Android Market and select the app you want to share, then scroll down to "Share This Application" to either email, text or Facebook message it to someone. But there are more convenient options than these standard ones.

Below you'll find a few other ways to recommend your most-liked mobile apps, whether they're for Android or iPhone.

Whether you're using an iPad, iPhone or iPod touch, Applist.me is the quickest way to generate a sharable list of all your favorite iOS applications by scanning the folder your mobile apps are stored in on your computer. It speeds up the long process of sharing links one by one and stops you from creating your own lists manually, giving you an instant (and pretty) recommendation list to share online.

To start, download the program for either Mac or Windows. You don't need to register an account or anything to get it working, just open it up and start scanning your apps folder in iTunes. You can choose to scan just apps from individual devices or simply all of them. Once it has scanned your folder, it will show you a list and you can uncheck the ones you don't want in your list (like that embarrassing Angry Sperm game). Once your list is finalized, it's uploaded anonymously onto the Web, to the Applist.me servers, and you're given a shortened URL for sharing. That link contains a nicely formatted list of all your chosen apps, with a convenient link to the App Store.

AppsFire works almost identically to Applist.me above and is also available for both Mac and Windows, but it's not just for Apple device owners—Android users can also use this app. Plus there's a lot more options, an acts somewhat like a filtered App Store or Android Market. AppsFire will scour the app in the stores, finding all of the free for a limited time apps that you could download. Also, you can share and compare your favorite apps with your Facebook friends, plus get personalized recommendations from AppsFire.

Share Apps doesn't send out favorite lists, but it's still pretty great for sending one app recommendation at a time from your Android device. Just download the free Share Apps from the Android Market and whenever you want to share a cool game (or whatever), simply open open Share Apps and choose it from the list. From there, you can either send an email or text message that contains a link to the app in the Android Market. It's super easy and stops you from having to actually share the application from the Android Market. The only downfall is no bulk lists. 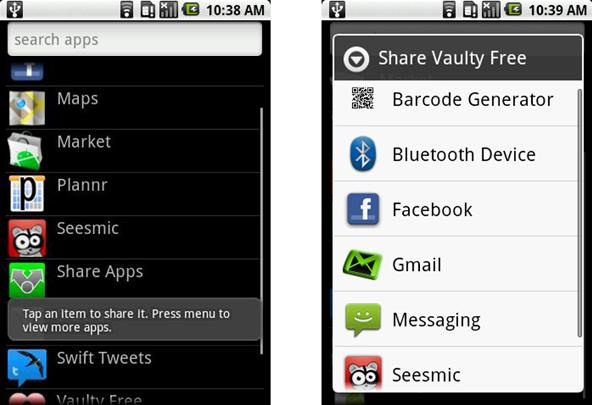 Unlike Share Apps, ShareMyApps does allow you to send full lists of your Android apps. Not only that, but you can add notes about them in the process. You also have plenty of sharing options, from email to Bluetooth to text, via a link or QR code. In addition of list sharing, you can also still send individual app links with ShareMyApps. 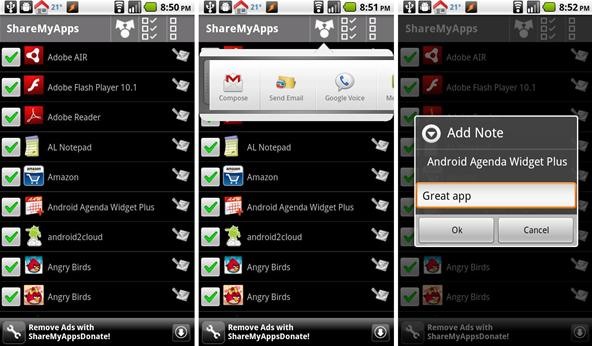 Other options for Android include Listables, Fast AppSharer, and Bump. Bump also works for iOS devices and works between platforms (if apps are available from both Android and Apple). Appreciate: Find Apps is another cool app for discovering new Android apps. And Frenzapp is another one worth checking out for Apple devices.