Immigration is a serious political issue in the United States, and those who oppose or support stricter immigration laws are often outspoken and candid about their beliefs, imposing their will on future legislation to not only politicians, but the general public—the voters. And what's the best way to reach the public? Entertainment. 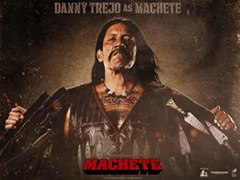 Illegals have been depicted in films ever since movies have been around, and the most recent one to date pokes fun at the absurdities that some are willing to undergo to protect their borders—Machete, directed by Robert Rodriguez and Ethan Maniquis. But one part of the entertainment industry that hasn't been tackled yet are video games—until now.

Owlchemy Labs is currently developing a game called "Smuggle Truck: Operation Immigration" for the iPad, iPhone, iPod touch and Internet. The gameplay involves driving a truck full of illegal aliens across the U.S. Mexican border, running into obstacles such as dead animals, rubble, cliffs and mountains, racing to beat the clock and hang onto as many immigrants as you can. The more illegals you have in your truck bed, the higher your score.

The creators said, "Smuggle Truck was inspired by the frustration our friends have experienced in trying to immigrate to the United States. With such a troublesome issue being largely avoided in popular media, especially video games, we felt the best way to criticize it was with an interactive satire."

"With a satirical angle on a real issue, we want to create a game that is fun to play but also stirs up discussion on ways to improve the problematic immigration system in the United States."

The release for iOS devices could be any day now, with a March 2011 release date displayed on their site. But if you just can't wait to try your hands at border hopping, you can play an online demo of Smuggle Truck at Kongregate.

UPDATE: Smuggle Truck was rejected by Apple for obvious reasons, but became available in the iTunes App Store as a less controversial version with fuzzy animals instead of illegal immigrants, called Snuggle Truck. It sells for $1.99. There is still an uncensored version of Smuggle Truck for Mac and PC, costing $5.

I wonder what physics engine it uses. Looks too familiar

It's coming soon for Mac and PC, too. You can pre-order from their site for 5 bucks (which sounds kind of expensive to me).