It's called a Quick Response code, but most know it simply as QR code, a matrix barcode dedicated to the world of smartphones. The information contained within the square black modules could be text, a URL, vCard, or some other kind of data. And even though mobile tagging has been around for eight years, it's just now spreading like wildfire across the globe, being incorporated into artistic portraits and wall art. And most recently... "social clothing".

Though the Barcode Yourself website sells personalized barcoded shirts, it's just a fun way to see how much you're worth at the grocery store. But the shirt-printing service ScanMe is one-upping that, making social networking easier than ever before. ScanMe creates a custom QR code just for you, links it to your Facebook, LinkedIn and Twitter profiles, and slaps it onto a fashionable tee shirt, camouflaged within some hip design comparable to the shirts seen on Threadless. The code includes your latest status message, a way to e-mail you, and even your phone number (if you want).

What if you were at a business conference and wanted to add some connections to your LinkedIn account? Just whip out your smartphone and scan their QR codes. What if you're at a club and met the perfect girl? Forget trying to grab her digits. Scan her QR code and add her as a Facebook friend. The possibilities are endless. There's only a few things that might make QR shirt-wearers worried: Having people scan your chest over and over again and limiting the amount of information somebody could grab from those scans.

If you want privacy, the information stored on your personalized QR code is customizable—you choose what you want it to show. And you don't have to limit yourself to tee shirts either; you can also save the QR code to your phone or slap it on a business card.

ScanMe is a UK company, but it offers free worldwide postage on the shirts, which cost from $20 to $40 each. You can also earn scan points each time you're scanned by somebody, which you can redeem on their site for more products.

It's a great idea, but could also roll over into the law enforcement system. Imagine if criminals and sex offenders were required to wear them. You can scan them and see just what they've done, though it's highly unlikely that you'd want to get that close to them in the first place. But maybe that's going too far anyway. 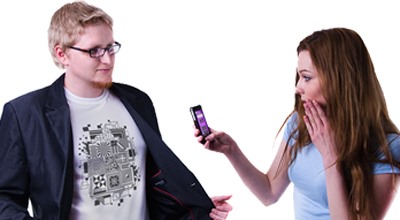 In order to scan these QR codes, you'll need a QR reader application for your device.

Get the Gadget Hacks Daily

Our latest smartphone hacks — straight to your inbox.

I prefer typing in a short url rather than try to take a picture of a qr code.