By now, many of you may have heard about iPhone tracking and recording your location data, but is there anything else being extracted from cell phones without our knowledge? If you're a Michigan state resident, the answer is an alarming "maybe". 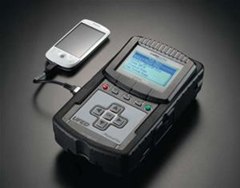 Michigan's police department have been using handheld gadgets called "extraction devices" for nearly three years now, which can take every lick of data from a mobile phone. The American Civil Liberties Union (ACLU) of Michigan claims that these DEDs (data extraction devices) are being used to secretly copy cell phone data during routine traffic stops.

Seems like a serious violation to the 4th Amendment, right? If the search and seizure law prohibits police officers from checking your trunk after getting pulled over, how could stealing your cell phone data be an exception? Do they really need to investigate your photos and texts? Don't worry, the ACLU are on the case (despite being unsuccessful).

The extractors are called UFEDs—Universal Forensic Extraction Devices—which are made and sold to law enforcement by Cellebrite. The data stealer can swipe everything in under two minutes, including text messages, photos, videos, passwords and even GPS data, from over 3,000 different mobile devices. It can even take encrypted data, and no password can hold it back.

However, the Michigan State Police department have recently issued a statement to defend their use of this hacking technology. In it, they claim that the DEDs are only used if a search warrant is obtained, or if the person gives consent to have his/her phone searched. Also, they state that only specialty teams use them on criminal cases, not during routine traffic stops. And the kicker—the devices are commercially available.

If you want to purchase one, you can try getting a quote from Cellebrite, but it will probably end up costing you more than $4,000. But Cellebrite's devices aren't just used for hacking—their UME-36Pro is used as a data swap tool for wireless service providers who can transfer your data from an older phone to a newer smartphone.

If you're curious to see how it works, check out the product video tutorials from Cellebrite below.

For more information on using Cellebrite's mobile forensics and data transfer devices, check out their website.

Get the Gadget Hacks Daily

Our latest smartphone hacks — straight to your inbox.

"The American Civil Liberties Union (ACLU) of Michigan claims that these DEDs (data extraction devices) are being used to secretly copy cell phone data during routine traffic stops."
I don't see how that's possible. It's not wireless. You have to plug your phone into the damn thing. How does a police officer secretly take your phone, plug it into their device, copy your phone, and then return your phone back to you all without you noticing?

Not secret in that way, but secret in the way that drivers who give cell phones to cops because they ask probably don't get what's going on, unless the cops say actually explain what they're doing. They're more scared about getting a ticket than why the cop's playing with their phone. But you're right, the ACLU's quote makes all drivers seem like buffoons—who wouldn't get what's going on?