Exploring a new city is tough if you're all by your lonesome. But if you have your iPhone on you, you're not alone at all... there's tons of great apps available for discovering the city around you. We've previously featured an app that helps you decide on what bar or club to attend, as well as one that shows you the hidden world unbeknown to most tourists (sometimes even the local population). When it comes to dining out, Yelp helps considerably, but it doesn't provide you with personalized recommendations for your taste. Instead, you should turn to robot Alfred.

It was originally supposed to be released today, under its chosen name of Seymour, but Clever Sense decided to give it an early test run on the iTunes App Store under the alias Alfred. And now that it's officially released, they've decided to stick with the robot's alias due to the popularity it received over the last 2 weeks (over 20,000 downloads). Why is this restaurant recommendation app doing so well? Because it works.

Developed by a team of Stanford Ph.D grads, the Alfred app uses the Clever Sense Serendipity Engine, which curates the real world by harvesting and sifting through the vast amount of information available on the Web. Alfred's sophisticated algorithm provides you with accurate recommends based on what you tell him about your tastes, and according to location, time, intent and social context. What does this mean? High quality recommendations in lightning fast speed.

It's been dubbed the "Pandora for the real world".

To set up Alfred, launch the app and answer a series of questions to establish your preferences, like what's your favorite place to eat breakfast and your most trusted place to grab a late night drink. Then, the next time you open Alfred on your iPhone, you'll get some pretty good suggestions based on your location and time of day. If you're looking at it around noon, it will show you some great lunch joints to eat at. 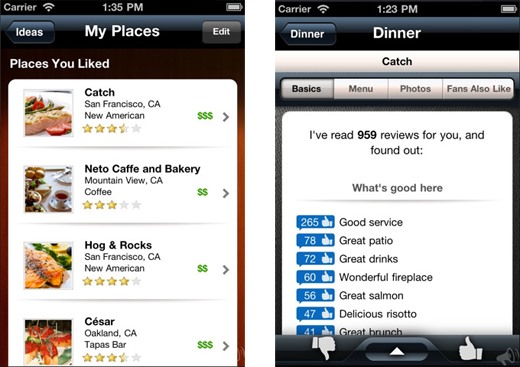 Alfred even tells you why he thinks you would like the recommended place.

It's also great because there's minimal work involved. You can't search for places like you can on Yelp, because it's more of an exploration app. Just open it up and choose one of the places to grab a bite. Easy as pie. 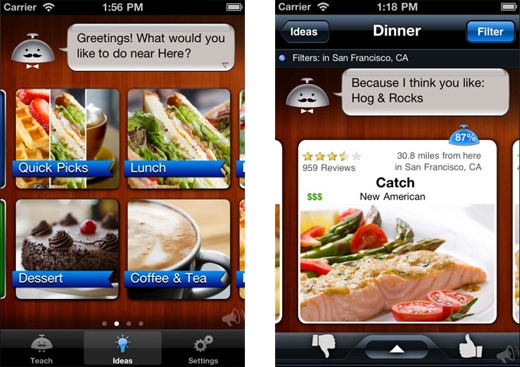 You can also change your likes or dislikes at any time.


Some of the suggestions are obvious, but it's still a great tool to use, especially when you're traveling and don't know the area. It's received a four-star rating in the App Store, with a lot of really great feedback.

This is not to be confused with the Alfred productivity app for Mac or the Alfred automatic responder app for Android.