On its quest for online domination, Amazon.com continues to expand past its basic web marketplace to fulfill the needs of everyone and anyone with a little cash to spend.

First, they battled the likes of Barnes & Noble and Borders Books with their online Kindle eBook shop. Next, they set their eyes on Netflix, competing with their Instant Video streaming media service. Then, they invested a large chunk of money in LivingSocial, challenging the popular coupon site Groupon. And as of last night, they're now trying to break into the mobile app market, something Apple has dominated in the past and Google is constantly improving upon. 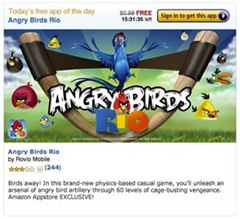 The Amazon Appstore for Android launched last night, becoming a heavy competitor for the Google Android Market. And it's already jam-packed with over 3,800 mobile apps. Plus, they're holding no expense at promoting it, offering a free copy of Rovio's Angry Birds Rio app, which is only available until the end of today. Then, Amazon claims they will continue to offer one free app each day.

Apple is not happy, but not because of the competition. They're currently suing Amazon for trademark infringement, stating that "Appstore" is too close to "App Store", which Apple has trademarked since the release of the iPhone 3G in 2008. They state the similar names may lead to confused and misled customers. But should it matter? Microsoft has recently challenged Apple for the use of "App" in "App Store", claiming it shouldn't be trademarked at all, because the word "app" is used to describe any software program. The legal proceedings for that debate are currently underway.

But for app buyers, the name doesn't mean much, as long as you can get good deals on mobile games and programs. And there's nothing better than free! If they continue to offer a free app each day, you could potentially have 285 apps by the end of 2011—without paying a dime!

Step 1 Get the Amazon Appstore for Android

Before you can get all of those great new apps on your Android-enabled device (not to mention a free Angry Birds Rio!), you'll need to download the app to your mobile phone or tablet.

You should receive a message on your device with a download link for the Appstore for Android. You should only have to do the following steps for each Android device you own to install the Appstore.

On your Android device, first go toSettings > Applications. Look for Unknown Sources and make sure it's checked. If not, check the box and press OK to the Attention dialog to activate it.

Now, it's just a bunch of clicking on your Android device.

The Appstore can now be found in your Applications folder.

You can browse, download, and buy apps either from your computers via the full website or through the Appstore app on your devices.